The World Post-Pandemic by Kjell A Nordström

On 6 May, together with Nordic Business Forum, we hosted a webinar with the Swedish economist and author, Kjell A Nordström. He recently wrote a book with Per Schlingmann called Corona Express and during this keynote, he shared some ideas from the book on what he believes the world looks like post-pandemic.

Here, we give you a brief overview of what Kjell highlighted over the webinar. 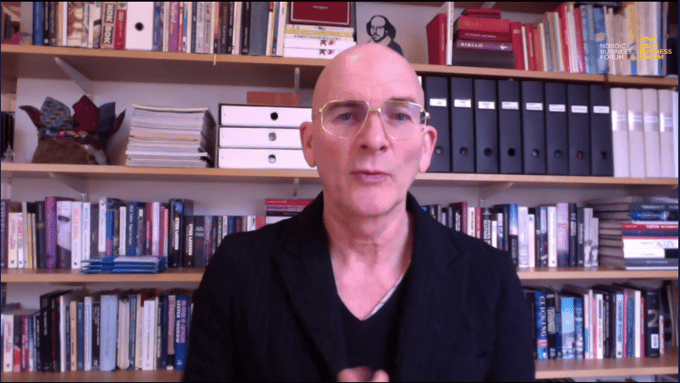 The Pandemic Is a Time Machine

“10 years in 10 weeks. It’s not very often that this happens. But it happened last year when the pandemic hit the world. We were able to transform 2020 into 2030 in so many aspects.”

Events, working, shopping habits, among other things changed in a heartbeat. Even though the technology had been there for a while, on a large scale we hadn’t taken that digital leap yet. So, the pandemic and last year were in a sense a time machine.

It was not a disruption in one sense, because that usually means that novel technologies, business models, or ways of organizing are introduced. Here, the question was more about well-known and rather well-established phenomenons simply speeded up dramatically.

“The virus was an acid test.” Kjell noted that this was an acid test in the sense that 200 countries around the world got more or less the same treatment. Basically, this was a research setting where a bit of acid was poured down on every country, and researchers could sit back and see what happens in each country in terms of economics, educations, politics, etc.

And what are the preliminary results of this test?

“The supermodels did it again.” The five Nordic countries were able to maneuver themselves through these dire straits. All of the Nordic countries seem to come out well below a 5% decrease in their GDPs. So, it seems that the Nordics were must more robust than economists predicted.

But why did these small countries in the North do so well? Kjell believes it has to do with the vast investments in technology and infrastructure that the countries have done over the past years and decades. “We could just switch over to digital in so many aspects in our societies.”

The success and robustness of the Nordic countries was actually the fact that surprised Kjell the most about this pandemic. In the beginning, he thought we would see drastic 25% losses in these countries’ GDPs, but according to Kjell, it turned out that the Nordics were able to handle the pandemic much smoother than he expected.

Humans Are Lazy and Reluctant to Change

It’s safe to say that many of us are wondering which of these new habits and routines that we’ve seen over the past year will actually stick. Kjell believes many of the changes are here to stay.

We, humans, are “lazy apes”, as Kjell put it; we want to preserve energy and are reluctant to change. “It’s only under pressure when we change.” Last year, the external pressure came in the form of the pandemic and forced us to adjust and transform. Now, however, people have already established these new habits and routines over the past year and most likely many are unwilling to go back to the world as we knew.

Kjell pointed out that it looks like around half of the new developments are here to stay. “Think 50% because that’s the number that keeps coming up.” As an example, he pointed a statement by the CEO of Eriksson, Börje Ekholm, who said that he expects that around 50% of the travel within the organization is cut permanently. Kjell stated that this 50% seems to be a good estimate of what is ahead of us.

The Era of Growth Is on Its Way

“We are entering an era of growth.” Recently, OECD projected that the world economy, meaning global GDP, grows 5-6% this year. Kjell underlined that this is a massive number when talking about the economy on a global scale. The Nordic countries’ economies are predicted to reach similar levels of growth.

To some extent, this growth is a reaction to the pandemic, but COVID-19 doesn’t explain the full projection. According to Kjell, the explanation drives from climate change — the “hot matrix” as he calls it. He pointed out that basically everything we have built on this planet since the 1850s has to be redone due to climate change. “You could basically take a look at any industry and the answer is the same: we have to rebuild, redo, and reindustrialize.”

This demand to rebuild will drive growth and provide opportunities for dynamic countries and companies. It also looks like that the Nordic supermodels are equipped to take advantage of these growth opportunities.

Urbanization Is Still the Name of the Game

64% of humanity lives in cities, and the number just keeps on increasing. “We are on the journey towards 80% within 20 to 25 years. This is a planet of cities.”

This is an issue Kjell has highlighted already before the pandemic. Companies and leaders should really start seeing the world through cities and urban areas rather than through the borders of countries. He acknowledged that this is somewhat a dividing factor among people; some are heavily against urbanization while others in favor. But, according to Kjell, strong urbanization will happen whether we like it or not.

One could actually think that the ability to work remotely might drive people away from cities. But this doesn’t seem to be the case — why? According to Kjell, there are probably many reasons. He referred to the idea of an urbanist, Jane Jacobs, who said: “a city is a hope machine”. Kjell underlined that even with the pandemic, the city still offers hope and opportunities for work, culture, people, and more. He further elaborated on the importance of people getting together by pointing out that not everything can be done remotely or from a distance: “I mean, try to learn acupuncture using facetime”.

Kjell stated that before the pandemic digitization was actually in its infancy. We can now see that most of the technology was already there but it was the human mind that was not ready for the change. ”The tools and toys were there, but only some of us were playing with them.” We all just needed a little bit of pressure to make the move and start playing.

To conclude, Kjell underlined that he believes there are three major aspects driving the post-pandemic world. “To make it easy to remember, we are looking at the future that is a hot, urban, digital matrix.“ According to Kjell, this is the matrix that drives the change, shapes the marketplace, and alters our lives for the years to come. “See you in the matrix!”

Join our newsletter and get notified of upcoming webinars and more!

Steven Kotler - The Art of Impossible

On 20 May, we had the pleasure to learn from Steven Kotler, a bestselling author and the Executive Director of the Flow...

On 16 March, together with SAS Institute, we hosted a webinar with Affectiva co-founder and CEO, Rana el Kaliouby. During...

How to Achieve Great Results through Self-Leadership by Ryan Holiday

On 16 February, we sat down with Ryan Holiday, a world-renowned bestselling author, to talk about self-leadership. Holiday...