[Summary]: How to Succeed with Corporate Innovation

On 9 December, we and Nordic Business Forum hosted a webinar to learn about corporate innovation from Peter Hinssen, a serial entrepreneur and a bestselling author. He shared numerous valuable insights on how you can become a Phoenix – a company that is able to reinvent itself time after time.

Here we give you a short summary of Hinssen’s ideas. If you missed the webinar, or want to watch it again, you can do so on obforum.com until Sunday, 12 December.

Prepare for Seismic Shocks
Hinssen started by pointing out that this year has taught us that we need to prepare for uncertainty. There are still a lot of people hoping to get back to the “old normal”, but he emphasized the fact that most likely life will never be exactly the same as it was before the pandemic. ”That’s an illusion”, Hinssen argued.

Rather, you should try to start seeing the ambiguity as a possibility. “There’s still a lot of uncertainty about what comes next. And that’s exactly the point: this is a set of opportunities”, Hinssen encouraged.

He went on to explain that we need to prepare ourselves for what he called seismic shocks. Many of the shocks we’ve seen have been technological, but they can be also biological (COVID-19), ecological (climate change), or even social (the Black Lives Matter movement). The combination of these different seismic shocks results in uncertainty. But the shocks also cause systemic shifts. “Every single one of these seismic shocks actually sets things in motion, and I believe this is setting up more disruption than we’ve ever had.”

So, the world we live in isn’t stable. “I call it the never normal”, Hinssen said.

Surviving and Thriving in the “Never Normal”
The never normal is here, but how can an organization succeed now? According to Hinssen, by becoming a phoenix.

First, Hinssen advised us to let go of the “old normal”, where stability, certainty, simplicity, clarity, and comfort were somewhat present and also heavily embraced. Now, you need to get used to the fact that the environment you operate in is better described with words like volatility, uncertainty, complexity, ambiguity, and discomfort.

Hinssen then went on to talk about the unicorn and the phoenix. He mentioned that for a long time many were obsessed with unicorns – the fast-growing valuable startup companies. But what we’ve seen during the crisis is that “unicorns are not immune to these systemic shifts and seismic shocks”. As an example, Hinssen mentioned Airbnb – a unicorn that almost overnight lost its entire business due to the pandemic. This is why the secret lies not in fast growth, but actually in reinvention.

A great example of a true phoenix is Walmart, said Hinssen. The traditional grocery store chain reinvented itself by launching an innovative delivery service, which boosted its business even more. It’s however good to remember, that the challenge is not only in reinventing and innovating on technology, it’s also about organization, people, and culture. “In fact, reskilling is often one of the biggest challenges.”

What he further argued was that without a long-term focus, it is impossible for you to reinvent yourself. Hinssen explained that we should spend 70% of our time on today, 20% of our time on tomorrow, and 10% of our time on the day after tomorrow (the long-term future). However, in reality, the percentages are more like 93%, 7%, and 0%. By spending most of your time on today and tomorrow, you’re focusing on current and future value, but not long-term future value. And the additional challenge that many companies have is that they are still spending some of their time in the past with what Hinssen calls SOY (the shift of yesterday). So, try to get those percentages right.

“If we keep on engaging with the same old thinking, we can only expect to get the same old results”, Hinssen underlined.

Another crucial point related to the strategy of a phoenix is to truly understand your customer. Hinssen advised us to think whether the products and services we supply are essential, and also relevant. “If you want to thrive in the never normal, you need to focus on being essential and relevant.”

The Structure of a Phoenix
When talking about the structure of a phoenix, Hinssen explained his hourglass model. In the model, the top section is what Hinssen refers to as sense. This is your “day after tomorrow”, the wide-range sensing that you do of the future. Below that you have the try section – the experimentations you do, based on the observations you made.

Once you’ve reached out to the day after tomorrow and figured out what it means to you, it all falls down to the bottom part of the hourglass. There you have the scale and run sections: the parts where you focus on the bottom line. 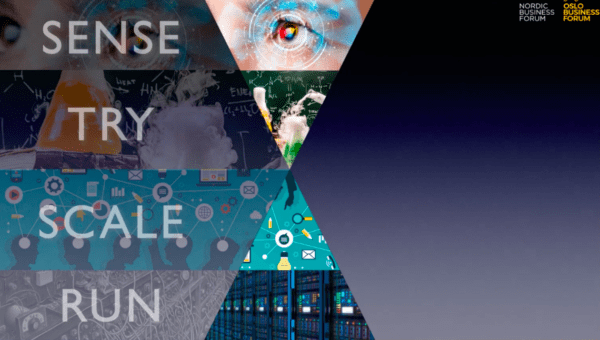 The Culture of a Phoenix
Finally, Hinssen spoke about the cultural aspect of a company that can reinvent itself. He actually argued that this might be the most important part; the mindset of the organization can be the key to becoming a phoenix. To help you with the mindset, Hinssen introduced us to his framework called vacine – a misspelled version of vaccine.


Can You Become a Phoenix Leader?
Finally, Hinssen also talked about what the Phoenix concept could mean to an individual – to you as a business leader.

He advised that for you to become a Phoenix, you should ask yourself the following questions:

And of course, while answering those questions, think of how you can improve and develop that aspect.

He concluded by encouraging us all with a quote from Maya Angelou: “If you’re trying to be normal, you will never know how amazing you can be.” So, embrace the never normal.