Nicolai Tangen is a successful hedge fund manager and the founder of AKO Capital, one of Europe’s leading investment partnerships. Today, he serves as the CEO of the Norwegian Oil Fund, which has a stake in more than 9,000 companies worldwide and holds 1.4 percent of all of the world’s listed companies. He entered the role of CEO in 2020 amidst significant media scrutiny.

At Oslo Business Forum, Nicolai participated in a moderated talk with Rachel Botsman, a world-renowned trust expert and fellow Forum presenter. In their discussion, Nicolai shared his perspectives on earning trust and revealed his techniques to persevere in uncertainty and adversity.

Rachel led the discussion by asking Nicolai about the controversy surrounding his role at the Norwegian Oil Fund and whether he felt trusted to become the organization’s CEO. He commented on the support he received from individuals internal and external to the organization, which was critical in surmounting the speculation surrounding potential conflicts of interest. He knew that overcoming criticism was a matter of proving his integrity and demonstrating his authentic desire to serve as CEO. Having spent the entirety of his career in asset management and, more recently, studying organizational psychology, Nicolai viewed the role at the Fund as the perfect intersection of his areas of competence. On Learning from Mistakes

Rachel went on to pursue Nicolai’s belief in learning from your mistakes, and asked him to describe how he became confident in leading with humility. Nicolai revealed that the nature of his work forced him to become comfortable with being wrong. In asset management, it’s not uncommon to be wrong nearly 50 percent of the time, which takes getting used to. “It requires more than just thick skin,” Nicolai said. “It takes the ability to create a safe environment where people can learn from their mistakes.” To foster this culture in his own organizations, Nicolai has borrowed lessons from sports psychology. He’s invested in learning how to increase his resilience for long-term success by focusing on process rather than dwelling on results.

At the Fund, Nicolai initiated an effort to develop something Rachel referred to as a “mistakes machine,” or a model that predicts the outcomes of certain decisions. Nicolai explored the advantages of this simulator and the differences between intuition and information. The model consults hundreds of thousands of data points, feeding you valuable information to influence critical decisions. Leaders are sometimes compelled to trust their “gut” or follow their intuition, but showing them their mistakes in the form of hard, actionable data can be empowering.

“It takes the ability to create a safe environment where people can learn from their mistakes.”
Nicolai Tangen at Oslo Business Forum 2021

On Leading in Uncertainty

Rachel pivoted the discussion to uncertainty, noting that the pandemic has been one of the most challenging times in history, particularly for leaders. She asked Nicolai to describe how the pandemic forced him to rethink his leadership style. Nicolai recalled three areas he focused on: leading and inspiring with clear communication, focusing on people, and providing feedback.

Adjusting his leadership style revealed to Nicolai a challenge many leaders wrestle with. Particularly in times of increased uncertainty, it can be difficult to lead with humility. Leaders feel compelled to provide answers and make decisions, even in the absence of information they need to speak confidently.

Rachel commented that it can be irresponsible for a leader to provide answers to questions he or she is not prepared to address and asked Nicolai how leaders can resist this pressure. He believes the strongest leaders are those who communicate honestly and openly, showing their uncertainty and admitting what they do and do not know. Leaders who fail to communicate in this way must acknowledge their credibility is at stake if they say something they’re unsure of—and damage to their credibility can be quite dangerous in the long-term.

Rachel also inquired about Nicolai’s pursuit of lifelong learning, and the techniques he has leveraged to strengthen his organization by borrowing from different disciplines. She asked him to share his biggest insights from this practice, and Nicolai pointed to two: his learnings from police interrogation and sports psychology.

From police interrogators, Nicolai has learned the value of critical thinking and questioning. Leaders can uncover many insights when they know what to look for, and spending time questioning will transform the way you understand people.

In his time spent with sports psychologists, Nicolai learned how to be resilient and navigate stress. Leaders can actually manipulate themselves into viewing adversity in a positive light and embracing it will empower you to overcome it. He encouraged the audience to “look in the mirror tomorrow morning and try it.” 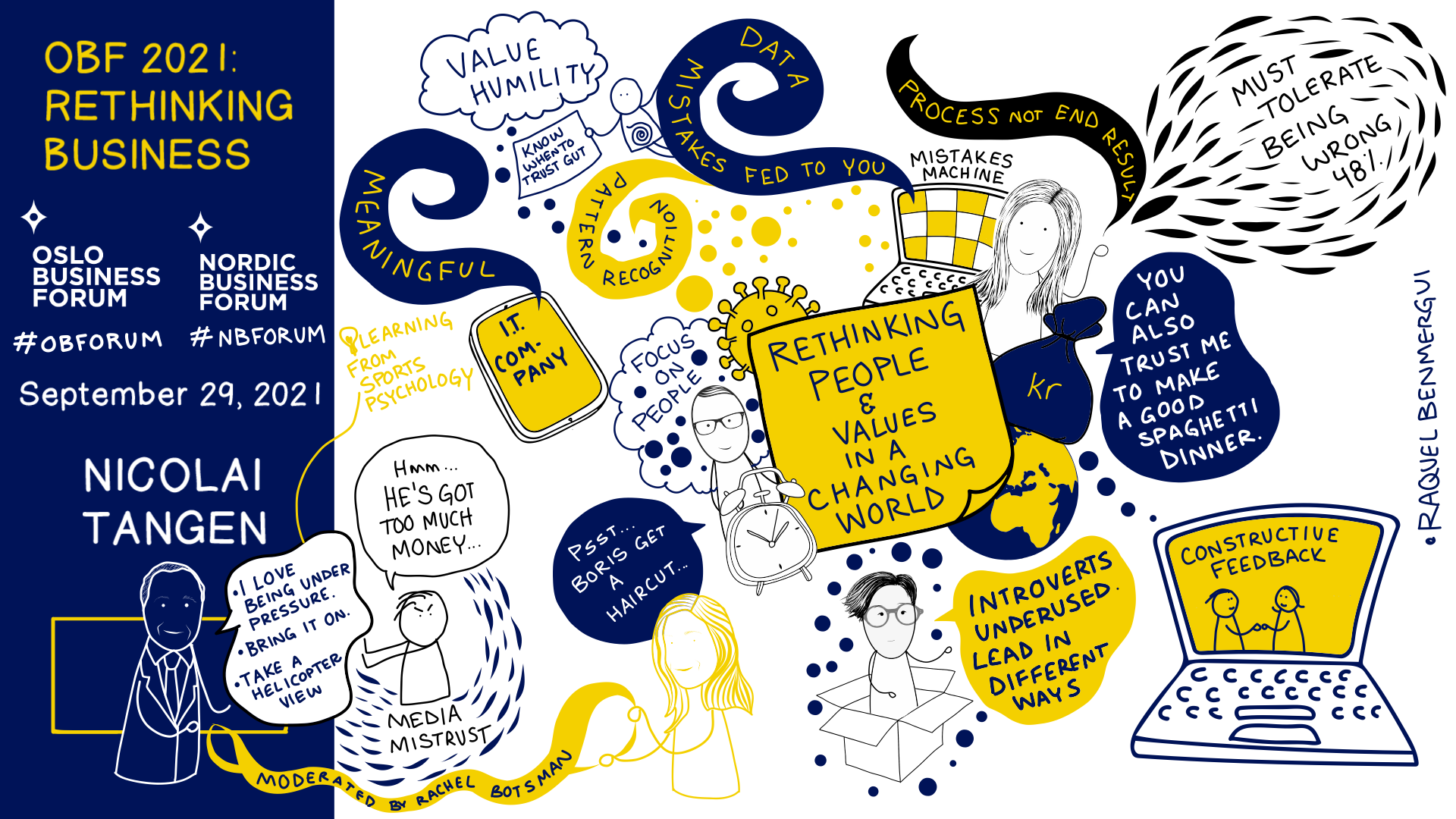 On Purpose and Integrity

Rachel pointed to Nicolai’s leadership credibility in the way he has transformed the culture at the Fund. In particular, she noted the talent he has attracted and urged him to discuss the impetus behind the influx of talent. Nicolai believes the number one factor influencing the increase in applications to join the Fund has been the realization that it is a job with meaning in an organization with a deep sense of purpose.

Rachel also revisited a key point from her own presentation, in which she described Warren Buffet’s hiring tactics. When Buffet considers a candidate, he looks for three things: initiative, intelligence, and integrity. He believes that if a candidate does not have integrity, the other two traits are moot. Nicolai responded with his perspective on identifying integrity, noting that it’s often something you cannot discern in a single interview. He said, “To identify humility in others, ask them what they are actively trying to improve upon.”

To close their talk, Rachel recalled that Nicolai said one of the most important skills a leader must hone is providing feedback. In light of this, she put him on the spot and asked him to offer feedback on how she could moderate a better discussion. Nicolai told Rachel that she did very well, and when pressed to provide constructive criticism, he said he would send her an email. Why? Because on his leadership journey, Nicolai has learned that positive feedback is provided in front of an audience and constructive feedback is best offered one-on-one. 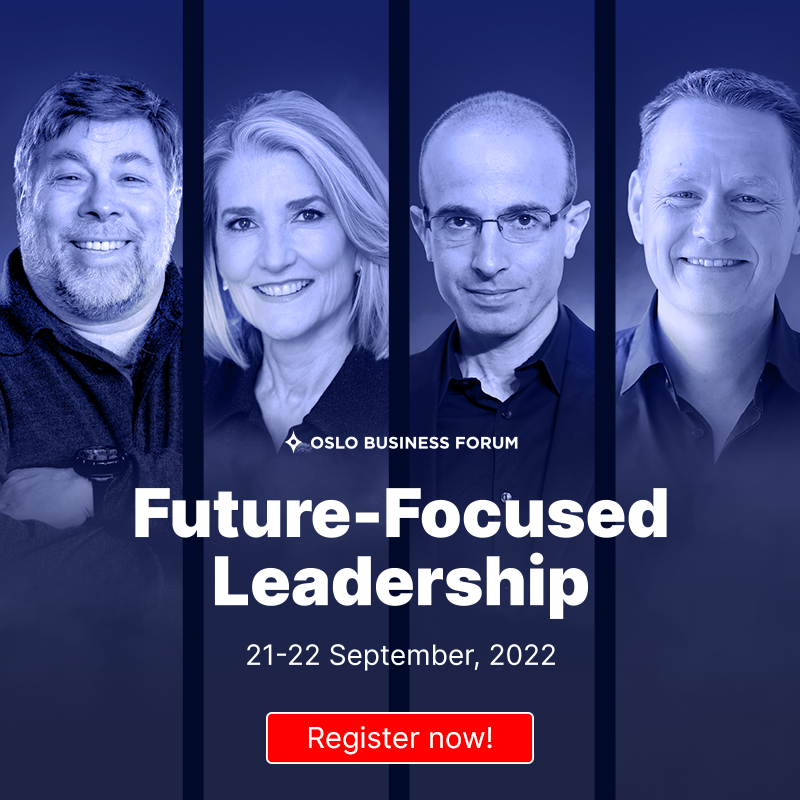